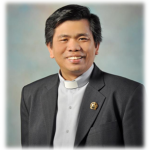 Because of loneliness, God created man and gifted him with an age of thirty. Once created, humans cried out of hunger and God created the first packet of Instant Noodles. Furthermore, God created the fields and humans were taught how to farm. Humans are so busy taking care of their fields.

It’s only been a week that humans are tired. He has to take care of the fields, eat and do many other activities. Again she complained, “Lord, God I need help. Give me something that can help me in the fields. ”

Hearing human complaints, God created the first buffalo. The buffalo was given an age of thirty years. Apparently buffaloes are smarter than humans. This beast asked, “Lord what do I have to do for 30 years?” God replied that he had to help humans. The buffalo turned to the human, “God ask for Your mercy. Don’t punish me for serving humans for 30 years. Just give me 10 years. ” But God has budgeted 30 years. So there is an excess of 20 years of age buffalo. God turned to the human, “will you get an additional 20 years from the buffalo?” Humans have many desires. “Yes, it’s okay God.” So humans get an additional “buffalo age” of 20 years. Now he is 50 years old.

A few weeks later the humans wanted something again. This time he needed something or someone to look after his house. And God created the first dog He gave up to 30 years of age. This dog thinks that instead of serving humans for 30 years he feels it is enough to serve only for 10 years. Thus humans get an additional age of 20 years.

Furthermore, humans need animals to accompany them at home. God created the first monkey which he also gave up to 30 years. Monkeys are also smart. He refused to be a human servant for 30 years he wanted only for 10 years. The remaining life of the monkeys is given to humans.

So humans get a total age of 90 years. The first thirty years he lived like a human. That was the initial ration. The next twenty years he began to realize that he was getting old and he was have to work hard like a buffalo. After reaching the age of 50 the children are grown, have a family and he must be a house guard like a dog. After the age of 70 it remains only to look in the mirror; see his face wrinkles just like a monkey.

The story shows a side of human life when it reaches old age. The story also shows images that circulate around fairy tales about those who are elderly. Generally the term elderly means negative, because elderly means being old, sick, lack of sleep and so on. Elderly synonymous with “old”, “decrepit” and useless. Simone de Beauvoir once said, “Old people are of no use to society. The higher the age of people the lower their knowledge. The more advanced the age of people the more backward thinking skills. ” Therefore, it is not strange if many people deny their old age and are reluctant to be called elderly. Actually no one is able to withstand the aging process. He began to grow old since he was born.

Many cultures seem to respect young people more than parents. The process of marginalization of those who are elderly looks quite strong. For example in the world of work, policies regarding retirement limit the age of a worker who is still considered productive. Though not all people included in the category of elderly are unproductive; because there are some people who remain fresh, strong and even wiser than those who are young. Another example can be seen in the assessment of people who say that those who are elderly should be pitied, looked after, cared for and given some money for their needs. This is true but it is not entirely true. Because in reality no there are a few elderly people who are still active in various social activities and even some who still have their own income.

But it should be noted that the process of marginalization of the elderly is also an impact of the elderly’s own assessment of him. Inappropriate images of the elderly are also created by the elderly themselves who sometimes prefer to be objects rather than being subjects. It is good to be noticed, to be spoiled, to be listened to without being denied and to listen to the opinions of others; many complain and grumble about the aging process the body is going through, feeling themselves useless and worthless to others.

It is very important for the elderly to avoid narrow and fatal views that make age only marked by the number of years they have traveled, chronological age. So when you reach your 60s it’s like life is over and one of your feet is in the grave. Some people also quickly feel biologically old because they feel old. This feeling is caused by the declining health condition even though in terms of age it has not yet reached the age of 60 years. But on the contrary it is very important for the elderly to develop a third age category, psychological age; where according to this age category even though someone has reached the age of 60s and above and the condition of his body’s health has begun to decline but if the spirit of life is still high and continues to try to do something according to his ability then he is still called young. Conversely, if a person is still in old age but has given up hope, likes to complain and likes to be noticed then he is actually old.

In Psalm 92: 13-16 it is stated that “the righteous will sprout like palm trees … even in old age they still bear fruit …” The psalmist understands the true nature of palm trees. Age of palm trees for decades. Palm fruit actually gets better when the tree is old. With the example of the psalmist’s palm tree, it is said that old age is the time to produce quality fruit. What is the reason? The Psalmist continues, “… those who are planted in the temple of the Lord will sprout in the court of God.” Old age is a fruitful period because it is rooted in God. What is the purpose of fruiting in old age? The psalmist replied, “… to proclaim that God is true, that He is my rock mountain …” This means that old age is not to be unemployed, but there is a function, namely to witness to generations of children and grandchildren about the greatness and loyalty of God.

Whereas in Isaiah 46: 3-4 the Lord states that, “… until your old age I am still He and until the white of your hair I carry you …” This Word of God wants to state that God cares for us both in our youth and old age. God is actively present in the stretch of time in our lives. This verse also reminds us of old age. God gave old age not to be used to see things that are ugly and annoying, Old age is given not to complain. This saying of God invites us to see the good things, that is, God has truly been generous and that we are not old alone. Because there is a God who is carrying us.

The wise Rabbi Heschel said, “The final years are the years of formation, rich in possibilities to give up life’s foolishness, to see clearly the lies of oneself, to deepen understanding and love. Then it becomes the basis for these blessed years, the faith that God who gives us life continues to sustain us. We grow old because He wants to be and even though we cannot see the reason, there are reasons … ”

What should the elderly do so that in the midst of all their physical limitations, their presence, family, church and environment can still be felt? Borrowing the terms used by Mr. Indra Natawigena, there are three things that need to be of concern to the elderly, namely:

There are wise words that state, “Growing old is a certainty. But growing up in old age is a choice” These words remind us that we cannot fight aging and the body’s aging process but not all adults can do so. Mature in the elderly means staying energized and passionate in living life. Don’t waste the advanced age that God has given. Because not everyone gets the chance to enter old age. Various talents, skills and life experience policies can be a major contribution to the lives of the younger generation.

The Church, through the Elderly Commission, needs to think about the types of programs and activities that encourage the elderly to be able to actualize themselves. And instead of programs and activities that only spoil and comfort the elderly which will further strengthen the notion that the elderly are indeed synonymous with “old”, “helpless”, “useless”, “troublesome”, “wants to be pitied” and so forth. So that even in old age they still bear fruit for God, the church and others.

Growing old is a certainty. But growing up in old age is a choice